Alebrijes! Why we love them 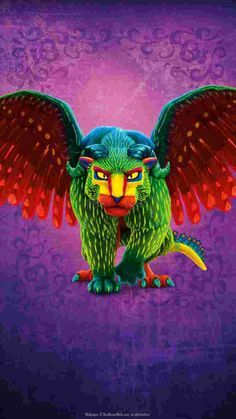 Alebrijes are spirit guides, strongly connected with nature. The Aztec people created these symbolic creatures mixing two living animals. Their role was to link the spirits and the real world and guide a person through their lives. It is also said that they are guardians to the souls of the deceased.

In the world of the living, they are referred to as spiritual guides for the soul, reminders of your place in the world, and society, holders of the torch; They are meant to lead you in your path and help you become who you are supposed to be. They connect with our deepest true selves and our shared imaginary realm.

In the Zapotec culture the animal that will come is your spirit animal therefore the child’s personality.

Alebrijes are also used to  protect and scare away evil spirits, some people might have them in their household for that reason, or simply to admire their artistic beauty and craftsmanship.

Other cultures’ like the Nahual, say there are beings that can transform themselves into animals which allows them to communicate with nature.

Alebrijes were also linked to the divine because gods were linked to a specific animal.

Commonly we now also see them as  guardians to the souls of the deceased, so in The Day of the Dead celebration, it is common to see a parade with the use of Alebrijes, we can see them placed in the beautiful and colorful altares raised for the loved ones on this special day, to guide and protect the deceased soul’s  in the crossing.

The origin of the Alebrijes as an art form can be traced to Pedro Linares, an artist who lived in Mexico City in the 1930s. Linares said that in 1936 he was very ill and then became unconscious. While in a state of unconsciousness, he began to hallucinate and seeing visions of a forest with strange animals.

When he recovered, Alebrijes were then hand-made which means no two sculptures are alike. They can be a cat with wings, a snake with legs, or perhaps a lion with the head of a giraffe.

His work caught the attention of artists from across the country, including Frida Kahlo and Diego Rivera.

They are commonly linked to the day of the dead, especially after the movie Coco.

In the crafting of the alebrijes, it traditionally incorporates three of the four elements.

Call it myth, stories or legends, real or fantasy but what we do know is that they are unique and profound as the Mexican culture is.

“To hold a piece of Mexican popular art in one’s hand is to hold something larger than a mere object. You are holding Mexico in all its diversity, its rich past, its complex present, and its uncertain future”

As you can see, the depth to Alebrijes goes beyond, past, present and future, real or imaginary and I wanted to incoorporate them into my next novel "A Lover's wish" A day of the dead romance novel.

Join me in this wonderful journey and subrcibe here